The Crimson Sunbird (Aethopyga siparaja) is a widespread species of sunbird resident from tropical southern Asia to Indonesia.

The adult male is a brightly coloured bird, with a crimson head, mantle and upper breast, hence its common English name. It is widely believed that it was voted as the unofficial National Bird of Singapore in 2002 due to the description of it as a “tiny red dot”, just as Singapore has been described.1 (link)

There is however another equally important connection to Singapore. The first person to collect, describe and publish on this species in a journal is non other than Sir Stamford Raffles, the founder of modern Singapore. He did so in 1822 while stationed in Bencoolen (now Bengkulu, Sumatra). The scientific species level name is siparaja, probably derived from the name of the bird in the Malay language, which is Kelicap Sepah Raja. The etymology of this probably is best left to scholars, but ‘sepah’ means scattered in modern usage, and ‘raja’ means king. So perhaps a sunbird scattered by king? Update: Sepah is used currently as the name for minivets in Indonesia, and sepah puteri (‘puteri’ is princess) is used for flowerpeckers in Malaysia.

Currently in Singapore, the sunbird is considered a common resident breeder. The Bukit Timah Nature Reserve, Central Catchment Nature Reserve and Bukit Batok Nature Reserve are places where one can find them rather easily. In the past, Mandai Orchid Garden is about the easiest place to see them, but has since been closed down. The pictures below are taken from that locality in 2010.

Sunbirds belong to the taxonomic family Nectariniidae. As the name imply, most of these birds feed on nectar. Their thin downward curving bills and brush-tipped tubular tongues are adaption for nectar feeding. Flowers that cannot be directly accessed are simply pierced at the base near the nectaries for feeding. They also supplement their diet with small insects when feeding young. 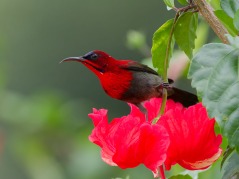 The adult male on a Hibiscus flower. Other than the crimson colouration, it has iridescent dark blue crown, yellow rump and blue tail

The female on an orchid pod. It is a much duller bird than the male. 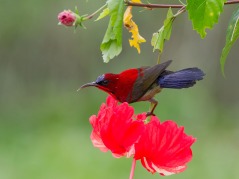 The male showing its attractive blue tail. The intensity of the reds in the Crimson Sunbird always make it a challenge to expose correctly. The added challenge in this picture was the reds of the hibiscus. 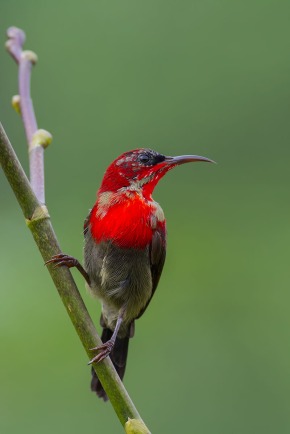 An immature male slowly changing the colour of its plumage. Seen here perching on an orchid stalk. 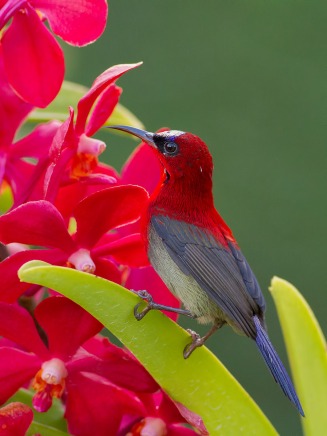 The adult male Crimson Sunbird on an orchid. Taken at Mandai Orchid Garden in 2010.

2 thoughts on “Crimson Sunbird in Singapore”