The Coconut Lorikeet (Trichoglossus haematodus) or Green-naped Lorikeet is a bird native to southern Maluku, West Papua islands and western New Guinea. For a long time, they have been considered a subpecies of Rainbow Lorikeet. In fact, some authorities still consider them a subspecies of Rainbow Lorikeet. However quite recently, both IOC and Birdlife International decided to accord them full species status. This means that the proper Rainbow Lorikeets (Trichoglossus moluccanus) are now confined to Australia.

In Singapore, the Rainbow Lorikeet we have in our current checklist is actually the Coconut Lorikeet. They are an introduced species that has been reported to be widespread since 1980s. They can be found at many localities and believed to be locally breeding. Recent sightings include the Central Catchment Nature Reserve, Choa Chu Kang, Buona Vista, Sunset Way, Singapore Botanic Gardens, Bishan Park and the former Bidadari Cemetary.

These lorikeets are gregarious birds that tend to congregate together especially in the late evenings. They roost in hollows of tall trees, which they presumably also use as nesting sites. Like other parrots and parakeets in Singapore, they have been observed feeding on the seeds of the African Tulip tree and ripe rambutan fruits.

Below are some pictures and a video clip of the Coconut Lorikeets, with captions of their locality and behaviour. Also in the gallery is the picture of a Rainbow Lorikeet for comparison.

A pair of Coconut Lorikeets at their roosting hole at Sunset Way. They are naturally curious birds. The call of the lorikeet can be heard at the second part of the clip.

A composite flight shot of a Coconut Lorikeet flying over Jelutong Tower in the morning of March 2012. 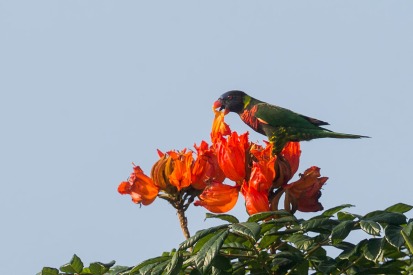 A Coconut Lorikeet feeding on a African Tulip tree at Choa Chu Kang.

A pair of Coconut Lorikeets at their roosting hole at the hollow of a tree at Sunset Way. Taken in 2011.

A Coconut Lorikeet and a (Violet-necked Lory X Coconut Lorikeet) hybrid at Malcolm Park. The Coconut Lorikeet is at the top with a missing lower mandible. They formed a pair and shared a nesting hole. Unfortunately that tree has since been felled due to development in the area. 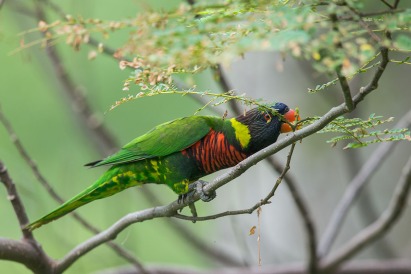 A recent picture of a Coconut Lorikeet at the former Bidadari cemetary. 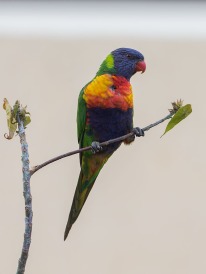 The Rainbow Lorikeet from Brisbane for comparison of the differences between these two species.

3 thoughts on “Coconut Lorikeet in Singapore”