The Great Cormorant (Phalacrocorax carbo) is a very common and widespread member of the cormorant family of seabirds. It is found on every continent except South America and Antarctica.

The species breeds along rocky maritime coasts, nesting on cliff ledges or rocky islands free of predators, and feeding in sheltered inshore waters.

In the past, Great Cormorants migrate to Peninsular Malaysia an possibly Singapore, but now only rare vagrants occur in Malaysia. In Singapore, there is/was however a population of Great Cormorants, escapees or free ranging birds from the bird park. They have been found residing at Kranji Dam, Sungei Mandai and Mandai mudflats near the estuary of the river. In 2004, there was a record of 11 birds seen at Kranji Dam1. Breeding is suspected as there were juvenile birds along with the adults.

Back in February 2011, reports came that there were 2-3 of them at Mandai mudflats. So I brought along my newly acquired long lens, hoping for some pictures. There were two birds sunning themselves and I managed a few photos and a video. Unfortunately I did not manage any action shots that day. Since then, I have not checked on their status, nor heard any further news of their whereabouts. Perhaps it’s time for somebody to have a look at their current status.

A video of an immature Great Cormorant at Mandai.

An immature Great Cormorant standing on one leg on a wooden pole. Taken at Mandai. 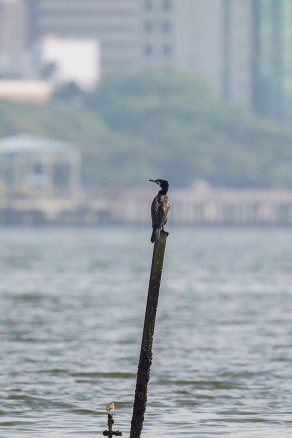 A size comparison picture of the Great Cormorant and a Common Sandpiper. In the background is Johor Bahru city.

A close-up of the immature bird. 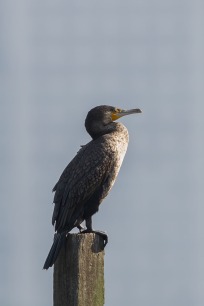 The background is a multistory office building at Johor Bahru.

A comparison of background. Here the background is lighter.