The frogmouth a group of nocturnal birds related to the nightjars. They are named for their large flattened hooked bills and huge frog-like gape.

The Philippine Frogmouth (Batrachostomus septimusis) is an endemic species found throughout the Philippines. The ones in Mindanao are of the nominate subspecies septimusis.

In May 2014, I had a chance to see this species while on a trip to PICOP, Mindanao. In an inconspicuous part of a dark patch of forest, sat a lone upright figure than was motionless and could pass off as another stick.

The Philippine Frogmouth sitting on at the end of a horizontal branch with 4 side branches projecting out. The mound it sits on is the nest that consist of its own downy feathers which is held in place using spider silk, moss and lichens. An on it presumably sits a single egg. 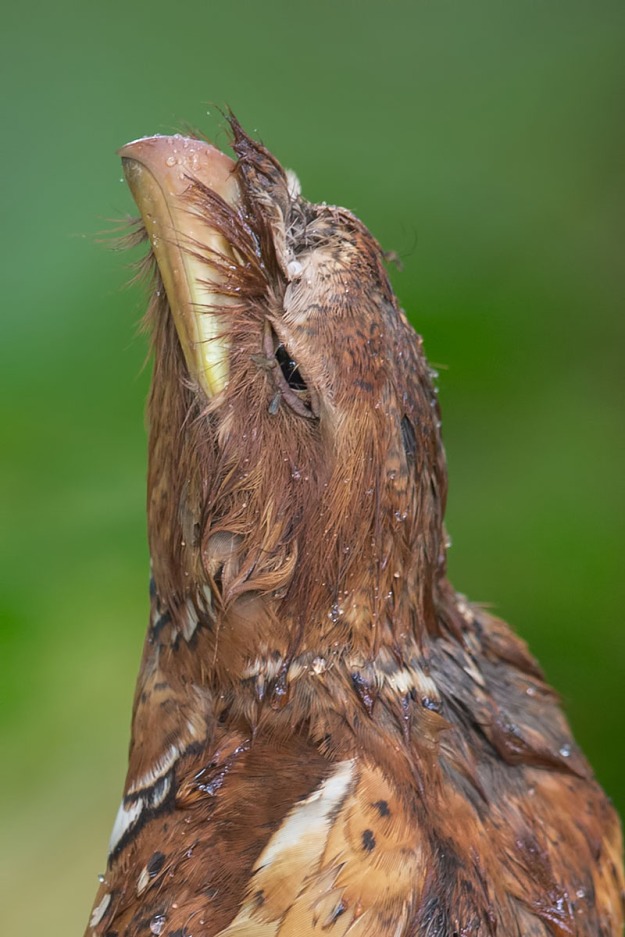 A cropped close-up of the male, as it is known to incubate the egg in the day and the female does so at night. While this may seem like an attractive proposition to the female, this species is a nocturnal hunter of insects that is inactive during the day. So it seems that the male is doing what it does normally anyway in the day, which is to idly sit still! The female on the other hand have to both incubate the egg at night and presumably only have a short window to find food.

We left the frogmouth alone after taking some photographs. It was a wet day anyway, so birding was not so good. The next day, we walked through the same trail, and made a bit of an effort to get another set of photos. By now, the frogmouth have changed its position, and it seems more awake. 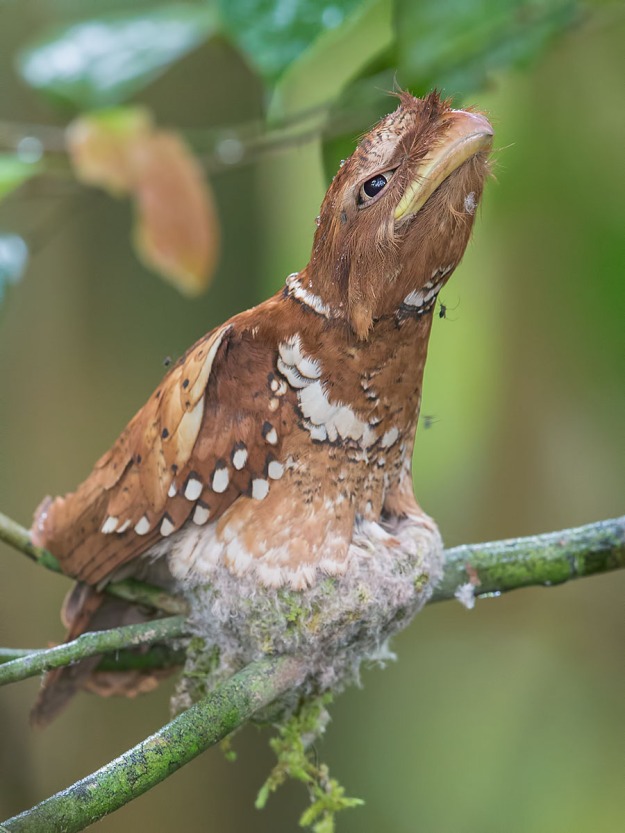 A more frontal shot of the alert frogmouth. Just like in the previous pictures, it was wet and the mosquitoes were having a field day. Unable to move, it seems like a pitiful figure.

A final close-up of the frogmouth before leaving it alone.

Photographically, the shots were taken handheld which can be a blessing or a curse. It was good to be able to frame the picture freely, as the viewing window was not very large. A tripod mounted setup would have been very difficult to maneuver. On the other hand, the bird was in a dark patch of forest, so I had to shoot wide open, crank up the ISO and lower the shutter speed considerably. In the end I managed to shoot at 1/40s in some shots at ISO3200. Not too shabby, so it was a reasonable compromise. 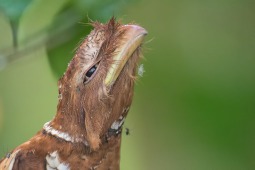 1 thought on “Philippine Frogmouth of Mindanao”

A colourful Oriental Dollarbird perched on a thin branch at Jelutong Tower, Singapore. #sgbirds #singaporebirds #sgbiodiversity #orientaldollarbird #jelutongtower #macritchie
An Orange-headed Thrush at Dairy Farm Nature Park, Singapore. This is a rare migrant to the country. #sgbirds #singaporebirds #sgbiodiversity #orangeheadedtheush #dairyfarmnaturepark
The Himalayan Vulture is one of the largest Old World vulture and raptor. They are normally found in the higher altitude Himalayan region. Immature birds have been documented to wander to Southeast Asia during the winter months, possibly due to reduced food availability during that period. This year an unprecedented number arrived in Singapore and some landed in the busy Central Business District to rest for the night. This bird was photographed as it took off for the day. The background is a tall office building. I thought it’s an entirely unique and apt background to mark their presence in Singapore. #sgbirds #singaporebirds #sgbiodiversity #himalayanvulture #vulture